It is the near future and the world has become crowded, warm and sick. Persistent pandemics and climate change have bankrupted most of the world governments.

Banks and businesses have merged into superentitys with almost limitless power and private armies. The rule of law has reverted to the rule of man.

The only thing separating you from the corpses at the mass graves is your will to live, the few friends you really trust – and your gun.

The climb from the warrens to the upper echelons of power will be long and perilous, but if you make it, YOU will be deciding the fate of our futures!

The following is an example of a simple combat encounter between two parties – Alex “Beep, Beep!” Monroe and Zoya “The Wolf” Vovk, who has taken a contract to kill Alex. This will be Alex’s first real combat encounter. Alex has 20 Health and Zoya, who has the Transhuman Background has 25 Health. The Combat Encounter begins, when Zoya tries to ambush Alex in a quiet park. Zoya makes a Covert Ops (Stealth) skill-check. Zoya’s Covert Ops skill is 5D6 and she rolls 15. Alex’s Process (Awareness) is 3D6 and she roll 12, not quite enough to detect Zoya, so Zoya get’s one free action before Alex gets to react. 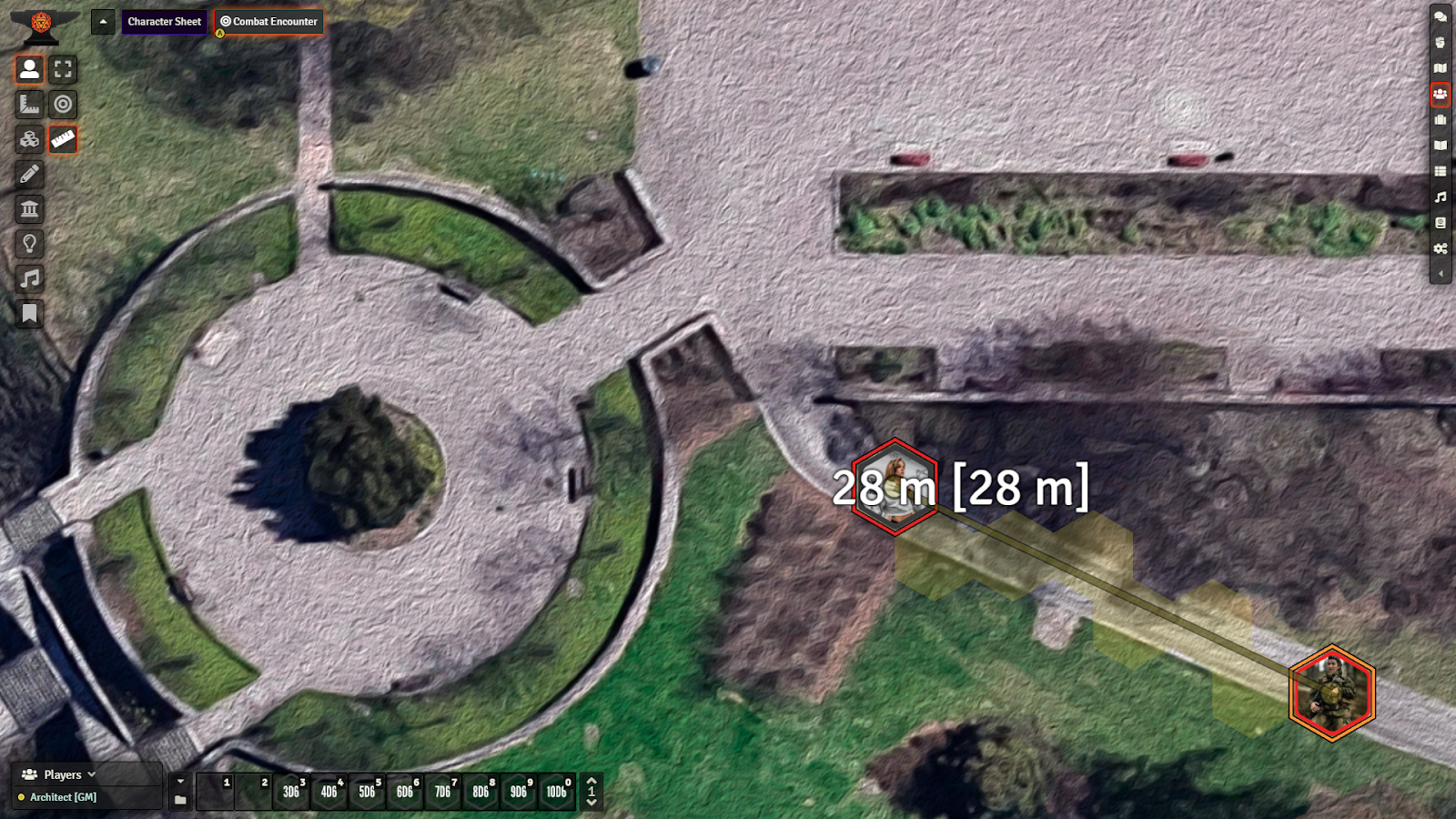 Zoya is wielding a Hermes submachine gun, which has a handling of 13. The distance between Zoya and Alex is 28 meters. The Hermes has a range of 15 meters, which means the Handling roll increases by 1 to 14 (28/15, drop decimals). Since Zoya beat Alex’s Awareness, she is attacking from Stealth and receives a +1D6 bonus.

Zoya’s skill with Small Arms is 5D6, so she roll a total of 6D6 dice.  The result is 20, a whole 6 over the required 14 and enough to hit Alex in the back for 2D9 points of damage. Zoya has also purchased the Butcher Character Upgrade, which gives Zoya an additional +2D6 damage when attacking from Stealth. Zoya rolls 2D9+2D6 damage for a total of 20 points!

Alex is wearing the Recon Series Light armor, which absorbs 1D6 damage. Alex rolls the Armor Die for the maximum 6, but 14 points of damage comes through and inflicts serious damage. Alex’s armor is also destroyed in the process since the damage absorbed is the same as the Degrade number. Panicked, Alex rolls Process (Initiative) with 3D6, while Zoya rolls 4D6. Alex gets a lucky 15 and Zoya gets only 13, so Alex acts first. Alex spots a sturdy stone wall ahead and rushes for cover! Alex’s speed is 8 and the distance is 12 meters, so she has to use both actions to get over the wall. Leaping the wall is an Easy (5) Athletics skill-check, and nothing to Alex who has a 5D6 in Athletics. Since Alex cannot fail the roll, she doesn’t have to make a skill-check. She lies prone behind the wall. Zoya no longer has a line of sight, so she can’t attack Alex with her weapon so Zoya carefully moves closer with one action and saves one action to react after Alex makes her move.

On her next turn Alex pulls out her gun and takes cover behind the stone wall, while Zoya moves closer still while targeting the stone wall. On turn 3, Alex takes a few quick breaths and peeks over the stone wall to shoot at Zoya who is 24 meters away. Alex is holding the Athena 9mm, which has a handling of 10, but a range of only 5! This means the Handling roll increases by 4 (24/5, drop decimals) to 14 from the distance. Alex’s Small Arms skill is 4D6 and she rolls 16, enough to hit Zoya in the chest. The Athena inflicts 2D8 damage and Alex rolls 9. Zoya is Wearing Ranger Series Mobile Armor, which has 2D6 Armor Dice and she rolls 5, taking only a bruise from Alex’s Attack. Zoya is at 21 Health.

Zoya has the Overwatch Character Upgrade and she gets to react after an opponent has taken one action, so she attacks Alex. Her Handling roll is 16, enough to hit Alex. Zoya’s attack inflicts 17 points of damage, almost the maximum, but since Alex has taken cover behind the Stone wall, her armor against Zoya is 5D6. The wall absorbs 13 points of damage, and only a small shard nicks Alex’s cheek for 4 points of damage. Alex is at 2 Health and now she has to roll Cool (Keep Going) skill-check against the 4 damage to keep her remaining action. She rolls 7, so she can shoots at Zoya again, rolling 18 and inflicting 12 points of damage. Zoya rolls her two armor dice and absorbs the full 12 points! However, her armor degrades by 1 Armor die.

Things are not looking that great for Alex! Zoya uses both actions to Sprint towards Alex, since she needs to get around her cover. Her Athletics (Sprinting) skill-check is 10, just enough to add an additional movement, so she moves 20 meters closer as her armor slows her movement speed to 7 meters per action (the one meter is lost as each hex on the map is 4 meters).

Alex uses both actions to attack Zoya. Since Zoya used all actions to move, Alex takes a -1D6 penalty to her Small Arms skill-checks. Zoya is only 10 meters away, so the Handling roll is 12.

Alex rolls 3D6 twice, 13 and 15, both attacks hit! Zoya takes 12 and 14 points of damage and her armor absorbs only 1 from the first attack and two from the second, for a total of 22 damage! Zoya falls to the ground, unconscious at -1 Health and is bleeding.

Alex slumps to the ground, relieved. She has just won her first combat encounter!